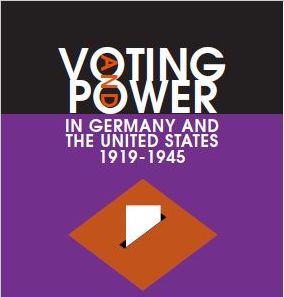 How did two constitutional democracies respond to changing circumstances after World War I? How did decisions of the people and the structure of the state interact to bring about divergent outcomes during the pivotal decades of the 20th century?

With each election, see what was at stake, meet the candidates, and discover the results. All the while, consider who could vote, who was prevented from exercising the franchise, and how those seeking power attempted to influence the electorate.

With the exhibit opening on August 25, 2022, at 3:30 p.m., the MHHE will be partnering with the KSU Department of Student Leadership and Service to sponsor voter registration. MHHE curator Adina Langer will also present a weekly series on Zoom for anyone interested in diving deep into the relationship between propaganda, voting, and power. Stay tuned for more information!

Berlin: A Jewish Ode to the Metropolis

In 2009, American Jewish photographer Jason Langer set out to face his childhood fears.

"After growing up in Israel and learning about the Holocaust, I decided to see Berlin for myself, keen to challenge my existing ideas and uncover reminders of the Jewish people who had lived there, until they fled or were hunted down and killed by the Nazis. I would spend the next five years reconciling my feelings and associations with Germany and the German people and writing a new narrative."

That new narrative became the basis for a book chronicling his experience and for a new photography exhibition premiering at the MHHE on August 25, 2022. At the exhibit opening, Langer will share some background about the photography project that led to the book coming out this Fall. Langer will return to present a lecture on November 9, 2022, at 6:00 p.m. The program will also mark the 84th anniversary of Kristallnacht, the Night of Broken Glass, Nazi Germany's state-sponsored pogrom against its Jewish population on the eve of World War II.